Home / Fire & Smoke Damage Restoration / What Are the Most Common Causes of House Fires in America? 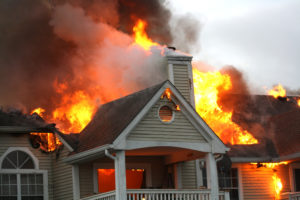 To help avoid a devastating house fire, you have to know what causes them. In 2019, there were nearly 400,000 residential fires in America causing nearly 4,000 civilian deaths and just over $7 billion dollars in damage. Household fires are by far the most prevalent type of fire in the US, and one of the leading causes of accidental death. Being able to cut down the devastating fatality and damage figures associated with house fires is difficult, but the more we learn about how they can start, the better chances we’ll have. In this post, we’re going to do just that. Understanding what you can and can’t do, and the consequences of particular actions and negligence, could prevent a fire in your home. Don’t be a part of a statistic, make sure that your property is safe against fire and destruction.

Most Common Causes of House Fires

There are some causes that will be obvious, and some less so. It’s important to learn about all of them to be able to prevent a fire in your home. Let’s take a close look at some of the common issues that cause fires.

Typically, electrical fires will occur for a few different reasons, all of which can end up being quite devastating. One of the more common causes results from short circuits sparking and igniting nearby building materials. Another one is from circuits being overloaded with current and overheating. Electrical fires tend to be among the deadliest because they’re hidden away, undetected until it’s too late. Anytime you move into a new house, you should have an electrician look at the wiring to make sure it’s safe.

Cooking-related fires make up about half of all residential fires. They’re usually caused by overheated grease or an oven/stovetop being left on unintentionally. If hot enough, grease can ignite by itself. To avoid kitchen fires, never leave the stove or oven turned on while you’re out of the general vicinity. If something ignites, you can usually stop it from progressing by smothering the fire with a metal lid and turning the appliance off. Any portable appliances should be cleaned and left to cool before being stored. A toaster, for example, might have leftover crumbs in the bottom that could ignite and if you put it away before it has cooled, a fire could quickly spread through a cupboard.

Barbecues can be quite dangerous as well. If left unattended, they could spark and ignite a deck, or tip over during a strong gust and light up something nearby. A grill in use too close to a house could easily ignite an exterior wall.

In older homes, baseboards and space heaters are common and are in heavy use during the winter months. When fabrics like bed sheets or drapes are left too close to the heat, it’s possible that they could catch fire. Any heaters that require fuel are quite dangerous, as are electric heaters that have the potential of having faulty wiring. It’s always a good idea to keep portable heaters away from anything flammable and make sure they’re off and cooled before you put them away. Never leave any type of old heater on when you’re not at home.

Another common cause of fire in the winter months is Christmas trees and other Christmas decorations. When you think about it, it makes a lot of sense. Whether or not you have a real or fake tree doesn’t really matter when you’re covering it in lights and other flammable materials like tinsel and garland. If a tree lights, it’ll be engulfed in flames within a few seconds. When it’s fully lit, then you’re in legitimate trouble of a large-scale house fire. Always make sure that the lights and decorations on the tree are turned off when you leave the house or go to bed. If you’ve got older lights on the tree, replace them with the newer LED lights that don’t get as hot.

Candles are dangerous because people forget to blow them out. They’re a less common fire starter, but no less dangerous when it happens. You might use them for ambiance or to provide you with light during a power outage, but always make sure that your pets and your kids aren’t going to knock them over. Always remember to blow them out when you go to bed. If left too close to anything flammable, you’ll could be dealing with a fire in no time. It’s wise to set a reminder on your phone to blow them out before you go to bed, which might sound silly, but you don’t want to suffer because of forgetfulness.

Chemical fires aren’t as common as some of the other types, but if you’ve got chemicals in your home, they can ignite without notice. These types of fires occur when you’ve got vapors from gasoline or other household chemicals too close to an open flame. A small number of residential fires are chemically-induced (far more common in industrial settings), but if you’ve got flammable liquids in the house, ensure that they’re kept in an approved container that is sealed and kept at a fair distance from anything that heats up or might create a spark.

Chemicals are often kept in garages when the resident works on cars or other mechanical endeavors in the home. Keep oily rags, gasoline containers, paint thinners, and any other chemicals in a fire-proof cabinet and out of reach of any children that live in the residence.

It can be difficult to remain mindful of all the potential causes of house fires, but the more attentive you are to the things that could ignite, the better off you’ll be.

If you’re the victim of a house fire, your property and your health are at risk. Fires do varying degrees of damage depending on how long, and large, they burn. When you’ve had a house fire and the emergency service professionals are gone, you need help picking up the pieces. Let Blackmon Mooring & BMS CAT help you deal with your damaged home. Because the fire isn’t the only source of damage, you’ll be left with the lasting effects of smoke ingrained in the fabric of your house and the water damage from the recovery efforts.

We understand how important it is to get this damage dealt with the right way so that you can get back to living your life. Call us today to consult with one of our dedicated professionals about what steps you can take to making your home feel like home again.