Home / Disaster Recovery / The Advantages of Drones: How Drones are Used in Disaster Relief
October 17, 2018

How Drones are Used in Disaster Relief Efforts

There are countless advantages of drones. One of the most useful advantages is in disaster relief efforts. Here are some ways that drones are used in disasters and other catastrophes. 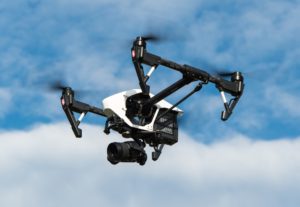 Drones — they’re probably the most controversial piece of technology to take the stage in the past few years. It seems like every other day, we see a news report about something a drone did, followed by a ten-minute argument about whether it’s justified or not.

However, did you know that drones are used for a lot of humanitarian work? In particular, drones have proven to be a very effective tool when it comes to disaster relief.

We’ll go into more detail about the advantages of drones in relation to disaster recovery efforts below.

Though not technically capable of rescuing people, drones are being used to locate people in need of rescue and evacuation. In the experiments conducted thus far, drones have noticeably outperformed humans at finding people in need of assistance.

A large part of this is likely due to the fact that drones are much smaller than the average person, thus can fit into much smaller places than humans can. Additionally, drones have cameras attached to them, which means that certain factors, such as smoke, are not an issue.

Furthermore, the fact that drones can fly makes it easier to locate people at higher altitudes, like those taking shelter on rooftops.

Another way drones are used is for supply drops. In various disasters, both natural and man-made, drones are used to deliver much-needed supplies to areas that would otherwise be inaccessible.

Part of what’s interesting about this is the sheer scope of it. Not only do civilian authorities benefit from having drones at their disposal, but so does the military. Being able to use drones to transport supplies means that human lives no longer have to be risked traveling dangerous routes to reach soldiers in the field.

So far, these supply drops have included everything from food and water to life jackets. Drones are even used to temporarily restore cell phone service to areas that experience outages.

It turns out that drones also make pretty decent firefighters.

Due to human pilot error, planes and helicopters can’t fly in all conditions. In theory, you could have a situation where particularly thick smoke or bright lights might make a drone’s camera basically useless.

This obstacle has not slipped by the drone manufacturers, though. Emergency drones now have infrared cameras on them, allowing them to see heat signatures, which means that thick smoke is no longer a problem. The wildfires themselves, which burn over 1,000 degrees, may interfere, but we’re off to a good start.

The biggest advantage is that drones can’t die. Sadly, about a quarter of firefighter deaths were due to planes and helicopters crashing (from 2006 to 2016). If this statistic is anywhere near the average, then drones have the potential to save a lot of lives.

A drone would eliminate this problem.

Drones are also a lot cheaper than helicopters, at least five times cheaper, in fact. Given all that drones are capable of, this will prove to be a more cost-effective method.

So, how exactly do drones help with wildfires? It turns out they can be equipped to carry water buckets.

How? It’s hard to tell, even looking at pictures – but it appears they are holding the buckets underneath them.

Not only can drones see in infrared, but they have other enhanced “senses” as well. Drones are capable of picking up sounds, as well as images, which could help in emergency situations.

They also work as functional chemical and radiation detectors. This means that meltdowns like those at Chernobyl and Fukushima will be far more manageable should they ever happen again.

One of the most valuables resources you can have, especially in an emergency situation, is information. Drones excel in this aspect. Their flights have been used to map paths through disaster areas, as well as calculate the true extent of the damage.

An added benefit of mapping damage is predicting further damage. The best example for this is flooding. By mapping out the areas that have been flooded, officials can better understand why the flooding is occurring, how much damage the flood is likely to cause, and what areas, if any, are likely to flood next.

This particular ability has proven to be valuable over the past few years, as hurricanes like Irma, Harvey, and Michael have struck the United States. If the rate of hurricane activity continues like we are currently seeing, drones will remain helpful in disaster recovery efforts moving forward.

Drones can do more than just predict the extent of disasters that are already happening. They might be able to alert or point us towards disasters that have yet to happen.

Four colleges are attempting to use drones to analyze super-cells — a form of storm that often turns into a tornado — and predict if a tornado will form, and how severe it will be.

The Advantages of Drones in Relation to Disasters

The advantages of drones are showing to be quite extensive, particularly when it comes to disasters. Already, they’ve been used to transport supplies, find survivors, assess and track damage, and a host of other things as well.

Time will tell how useful drones will be in future disasters, but they’re off to a great start so far.

If you want to learn more about our disaster recovery services, please visit our site.