It’s Sunday-Funday! Sundays are a no holds bar day of trivia, stories, and general shenanigans. Your week is tough and you have a lot to do, but you need a break. So kick back, relax and enjoy some brain candy today. 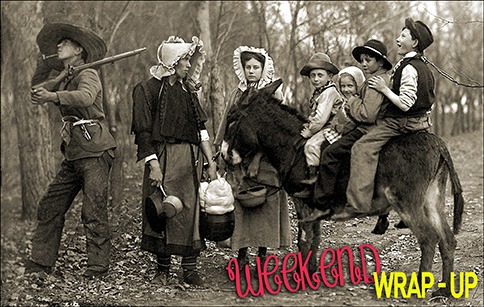 ‘Tis the season of the dreaded holiday picture. You know the one where you daughter sticks out her tongue, your son is picking his nose and your husband’s eyes are perpetually closed. Is it a tradition many of us continue every year saying:  “Remember us? If not, here is a picture that has been carefully planned for weeks for you to see what we look like all dressed up and stressed out.” There are pages and pages of Internet fun devoted to awkward family photos. We’ll pause while you take in a few…

If you don’t feel the pressure of sending the perfect holiday card, you aren’t
doing it right. Who gets them, how many do you need, how much will they cost…it’s enough to drive you to drink. Speaking of…maybe you should grab a cocktail before getting started on your holiday cards. Try this great recipe.

Some folks just own the awkwardness and send out hilarious photos that end up brightening every recipient’s day. Others spend hours picking the perfect image of their imperfect family. Whatever your style, there is no wrong way to wish someone season’s greetings. Whatever you do, wait till tomorrow to tackle your list, you have a sangria to finish.

Thank you for being the keeper of all life hacks, do-it-yourself projects and outfit inspirations. You are there when my brain can’t think of an appropriate casual Friday outfit. It is you that I run to when I am hosting a crowd for Thanksgiving. You have been there for me when I needed to bring a killer side dish and creative hostess gift.

But Pinterest, for all your many gifts, you have failed me. Maybe I should say, I have failed YOU. I tried, I really did, and you made it sound so easy! I got hooked by the professional photography and crisp, clean backdrops. Do your pinners really have children? Or are they robots? Mine have cried, whined and messed up countless projects while your pictures make me want to run to CPS because yours are clearly locked up in a dungeon.

I have long since forgotten what is in all those mason jars you talk about. Is that white powdery substance powdered sugar, baking soda or…no, it’s not that, I’m certain it’s not that. And make-your-own toothpaste sounded great until I tasted it. Now my children have PTSD brushing their teeth. I tried your makeup tricks, but they left me…well looking more like an 80’s TV drama actress than a full-time working mom of three. My makeup scared them Pinterest, is that what you wanted?

For all your many flaws I keep coming back, I can’t help myself. I DO want the perfect table for Thanksgiving, I want to make all my meals in the crockpot, and yes, I want my makeup to make me look 26 instead of 36…can someone creates a board for that?

Thanksgiving is a few short days away, so here are some fun facts about our beloved holiday.

What does the nursery rhyme “Mary Had A Little Lamb” and Thanksgiving have in common? Sarah Josepha Hale authored the rhyme about the unlikely friendship between lamb and girl and used her influence and success to petition for a holiday called “Thanksgiving” for nearly 40 years! Finally, in 1941, Congress made Thanksgiving an official national holiday. Over the years, there was a lot of debate as to when to celebrate Thanksgiving, but this act of Congress assigned it to the third Thursday of November. 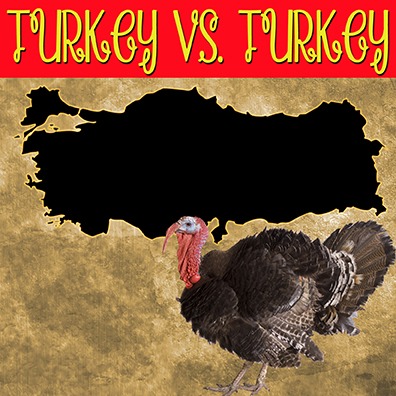 While it is believed that turkeys were not served at the first Thanksgiving, we gobble them up to the tune of 46 million each year. Most of the turkey consumed at Thanksgiving is domesticated and is typically too heavy to fly (or mate). But why is there a country named “Turkey” and a bird called a turkey? Well, turns out it was actually a mistake. When the Spanish brought back a turkey to Europe, the  English mistook it for a guinea fowl. The guinea fowl was imported to Europe through Turkey and was commonly referred to as a turkey-cock or turkey-hen so the name stuck. In reality, Turkeys are native only to North America but have gained worldwide fame because of the unlikely mix-up.

There is lots of disagreement where the first Thanksgiving actually took place. Texans claim that the first celebration of Thanksgiving took place in San Elizario in 1598. Some Virginians claim the first Thanksgiving was held at Berkeley Plantation on the James River in 1619 (that’s two years before the Pilgrim’s festival). Whatever it’s origin, we have the Victorian era to thank for what we consider a “traditional Thanksgiving.” They began to celebrate with much of the food we do today. So make sure your stretchy pants are clean and your napping spot is reserved…you have some turkey to eat this week!

Thanksgiving is over, which means the gift giving holidays are here. Kwanza, Hanukkah, and Christmas all celebrate with gift giving in some form or fashion. This opens all kinds of doors for all kinds of gifting shenanigans. What is the silliest gift you have ever received? To get your mind rolling, Readers Digest has some fan favorites. 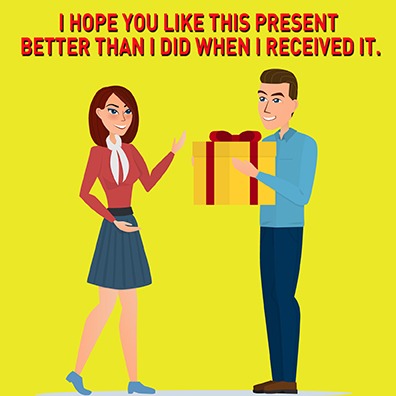 Do you want to give a loved one a silly gift? First, state your goal. Do you want to get a laugh? Do you want the person to keep the gift? Will you be offended if the gift is regifted or thrown away? Next, determine how much money you want to spend? For a mere $17,000 you can get this diamond encrusted pacifier for the biggest cry baby you know…Or stick with your budget and get something a bit more clever.

Regifting is an option many can overlook. Apparently, the 40 and below crowd is more likely to re-gift. As someone who falls squarely in that demographic, I too am guilty of re-gifting. After receiving a particularly unusual gift for our wedding, my husband and I turned around and gifted the treasure to my brother for his college graduation. In turn, he gifted to his friend for his birthday…and a cycle began. I wonder now, ten years later, if that package has ever actually been opened. My dream is that the treasure we gifted so many years ago continues to bring joy to faces holiday after holiday. The act of re-gifting has become so popular there is even a day dedicated to it…only three short weeks away!

The PTA holiday social is Thursday, on Friday you have your couples cocktail and hors d’oeuvres party, Saturday is the charity benefit and Sunday is family caroling. Your holidays are jam packed! Forget the food and hostess gifts, what on earth will you wear!? Each event has different attire requirements and you are on a budget! 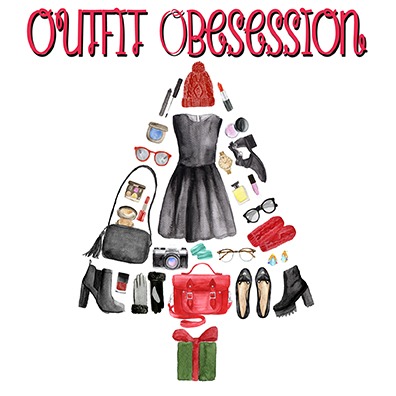 A dark dress or top is easy to dress up, try accessorizing! Sparkle and sequins are very popular this time of year. Buying a dress covered in sequins can be expensive (and a little over the top for your kid’s classroom party). Try adding a sparkly accessory or shoes to an otherwise bland outfit to give it some pop. Fur can also add a pop of jolly to an outfit. A faux-fur scarf or vest will bring your outfit from simple to merry, plus you are sure to keep nice and warm. Plaids and velvet can also bring outfits into the holiday season.

Jewelry will always bring an outfit up a notch. If you work in a formal environment this might be the best way to bring workwear to life for that holiday luncheon you attend. Jewelry does not have to be expensive to be festive. If pairing jewelry makes sure there is something that connects them like style or color. You don’t have to match all your jewelry so it looks like you bought a set, but don’t be too random or you will look mismatched. Whatever you do, try to stick to ONE statement piece…pairing that faux-fur vest with a sequin top and chunky necklace might just be too much for one outfit.

As you watch all your favorite holiday movies this month, we thought we would share some fun facts about those classics you have seen a dozen times: 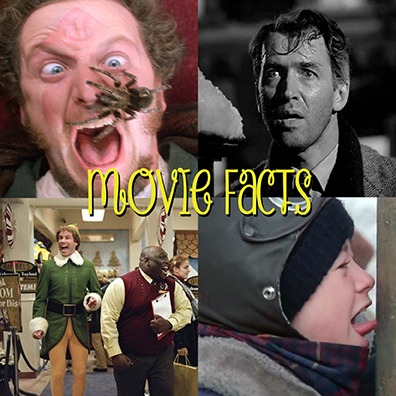 First, today is Bake Cookies Day…so get started on those cookies, but before you do, here are some fun facts about Christmas traditions. 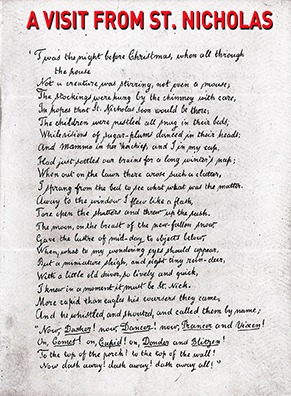 The tradition of Santa Claus can be traced hundreds of years ago to a monk named St. Nicholas. He lived in present-day Turkey and was admired for his generosity. One story even has St. Nicholas providing a dowry for three girls who would have otherwise been sold into slavery or prostitution by their father. As time went on, the Dutch form of Sint Nikolaas (Saint Nicholas in Dutch) was shortened to Sinter Klaas which eventually evolved to Santa Claus. In 1822, “An Account of a Visit from St. Nicholas” was published and the poem we know today as “Twas The Night Before Christmas” painted the picture of what Santa Claus looks like. Santa’s favorite reindeer, Rudolph did not come into the picture until 1939 for a Montgomery Ward Department Store promotion.

We have the Germans to thank for the Christmas tree. It is widely believed that Martin Luther started the lighting of the Christmas tree. The Puritans in America tried to stop the perceived mockery of the holiday but eventually, the Christmas tree made its way into popularity. Since roughly 1850, Christmas trees have been sold commercially in the United States. As time went on, it became apparent that lighting a Christmas tree with candles was wildly dangerous. So when Thomas Edison was marketing his light bulb he incorporated tree lighting into his strategy.

Two holidays are being celebrated on this day, Christmas and Hanukkah! With the two overlapping, I wanted to turn some attention to the Festival of Lights, Hanukkah. This year Hanukkah starts on December 24 at sunset and continues for eight more days and nights. 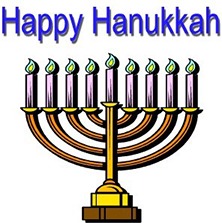 The celebration is observed worldwide and is done so in the remembrance of the victory of the Maccabees or Israelites over the Greek-Syrian ruler, Antiochus about 2200 years ago.

There are many traditions associated with Hanukkah. The lighting of the menorah, the spinning of the Dreidel, the music, and of course the food!  Families will consume a good amount of fried foods during the eight days and nights of celebration. Frying the food in oil is in remembrance of the sacred oil used to keep the temple lit miraculously for eight days. All that fried food sounds absolutely wonderful to me but probably not an ideal time to start a new diet. A few of these tasty traditional treats are latkes (potato pancakes) and Sufganiyot (jelly-filled donuts). YUM!!! Around 17.5 million of these delicious doughnuts are eaten in Israel during Hanukkah! That’s a lot of donuts!